Well it's been a little while since we've written an update and in that time we've managed to make it down to Chitwan twice. 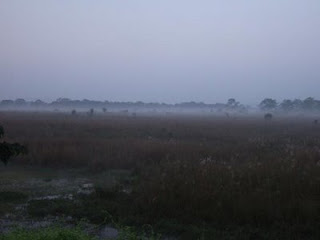 The Royal Chitwan National Park takes up nearly a 1,000 square miles in the southern part of Nepal and is quite a popular tourist destination. It's about 100km south of Kathmandu and in a part of Nepal known as the Terai. The landscape here is so different to the rest of Nepal it really has to be seen to be believed. We've spent the last nine months here surrounded by hills, never being able to see the horizon, but down on the Terai the flat stretches as far as the eye can see in 3 directions, and the hills to the north are often hidden in the haze (although we did get one day where the hills and mountains, nearly 200km to the north came out for sunset). 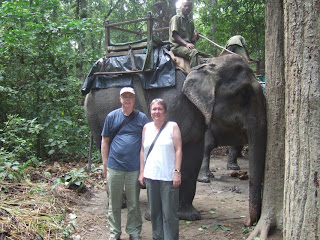 The first time we went there was with Dan's Mum & Dad. They were here for just over two weeks in all and had a great time. We've uploaded a load of photos from their stay with us onto facebook, so you can view them there. The place we stayed with them was deep inside the national park and to get there from the main road you had to drive for 45 mins down a dirt track, then get a canoe across a river that was probably close to 200 metres wide, then ride a jeep through jungle for 20 minutes, before climbing atop an elephant for the last 20 minutes into the resort. If you look through the photos you will see that we managed to see a group of rhinos one morning, up close and personal, along with many other animals, but unfortunately the big one, a tiger, escaped us. However we did come across a set of tiger prints no more than 5 minutes walk from our resort that were only a couple of days old. 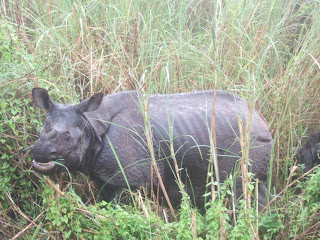 Our second trip came this last week as we headed down to Chitwan again with a group of children from school. Every year about this time the Secondary school disperses around the country for Activity Week. The different grades do different activities, trekking, community work, outward bound resort, work experience and for the oldest group a holiday (usually abroad). Becky's form group went to Chitwan, and as Dan's were split amongst the other trips as helpers he managed to go with Becky. The resort we stayed at this time was in a very different part of the park, in fact it was just outside which did mean we had a few more mod-cons, like electricity. The kids had a fantastic time, without any major incidents. We did have a baby elephant sit on one of the student helpers, but apart from a bit of shock they were fine.

This coming week is just a normal week in school, but in 2 weeks we have a big inspection of the school, a bit like ofsted, taking place. It's by a group called MSA (Middle States of America) and it gives us accreditation in the US. If we pass it means that American colleges and schools recognise the education that we give as being up to standard. We were accredited 5 years ago, without problems and we have had to do a lot of work as a school to prepare for this inspection. We're expecting it to go off smoothly, but there is a lot of pressure on a number of key staff, particularly Judith the CEO of the whole school. If you pray, then please do so for this important event.

As usual, I've written another long update, so well done for reading it all! If you scroll down a bit further (or click to look at older posts) you should see some school photos we uploaded to the blog last week.
Posted by Dan and Becky at 11:32