We awoke on Tuesday this week to find it dreary, overcast and drizzling. It was great as it reminded us of England. Winter has been mostly clear blue sky and sun all day every day, which makes outside nice and warm but very cold inside, especially in the evenings and at night. So it’s nothing like a British winter.

But Tuesday was proper British style rain all day. I was trying to explain to some of the students in my class how it was exciting for me to have “British” weather, but they didn’t share my excitement. Only the German student could understand where I was coming from. For the Korean, Nepali and Bhutanese students it was just bad weather. 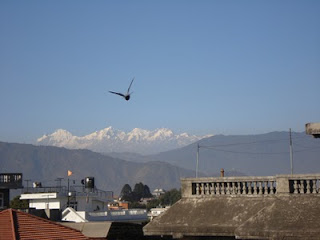 As it was our first decent rain since the end of September it also prompted a little bonus electricity. As Nepal is entirely reliant on hydroelectricity, which at this time of year is a little short in supply a day of constant rain was a boost to the system.

The other bonus is that it’s cleared the skies and we’ve had fabulous views of the mountains the last couple of days. It’s a bonus as we weren’t expecting to see them again until October. Because of the pollution and weather the mountains tend to go into hiding for a few months from now. 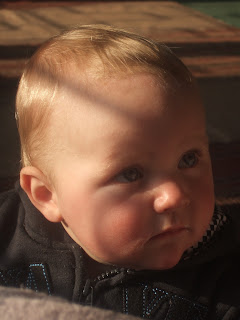 Samuel of course doesn’t remember Britain or it’s weather nor is he bothered by the mountains or the extra electricity during the day. His current daily challenge is trying to get to the things we’ve put out of his reach. Through bum shuffling, stretching and face planting he’s able to move quite some way across the floor now. He’s trying to have a go at crawling too, but hasn’t worked out how to actually turn his leg and arm movements into body movement yet, although we’re sure it can’t be long.
Posted by Dan and Becky at 14:47