We were trying to think of what to write for a blog this week, and the best idea we’d had was a traditional Christmas Family letter style blog. Till Wednesday when we had a fun morning out.

Kathmandu is getting very cold at the moment and so, with no central heating the evenings (at 5oC) are uncomfortable without a heater. We’ve been using a gas heater which had been playing up a bit with the flame shooting up a lot higher than it was supposed to, making us reluctant to use it. So rubbish at DIY Dan decided to investigate.

Changing the gas bottle worked, but on closer investigation I realised the gas bottle seemed to be leaking a little, but only when it was turned on. So I decided to change the regulator to see if that helped, it didn’t, the bottle still leaked.

Now the fun started while trying to change the regulator, as the plastic pipe going to the regulator was attached so tightly I couldn’t pull it off, so out came my trusty penknife to slice the pipe off (gas turned off by this point). To be honest I’ve always thought my pen knife was a bit blunt. My thumb proved otherwise… 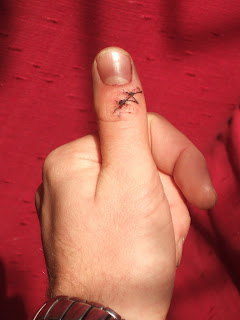 And so, a dash up to Patan Hospital. Now I had picked the best time of the week to do the slicing, 8.45am on a Wednesday morning, as the Foreigners clinic is at 9am on a Wednesday. So we stuck our head in and asked if they did stitches. The two doctors and one nurse were having a quiet morning with no other patients in so they were happy to help.

Becky, being no fan of blood, needles and other such stuff, elected to wait outside the room while the doctors and nurse set to work. While trying to put anaesthetic into Dan’s thumb (right on the middle knuckle) Dan decided he’d had enough and passed out through the pain.

So Dan ended up having his two stitches done, while lying on the floor of the room, with two doctors a nurse, and now Becky in attendance.
And now for something completely different…

We wish you all a very Happy Christmas and a Wonderful New Year. May you know God’s Blessings as we celebrate the birth of His Son Jesus Christ, our Saviour.
Posted by Dan and Becky at 08:03

Oww - that looks sore! Dan is no 'Bob-the-builder' when it comes to DIY! Have a great Christmas, love prayers & blessings from Unlce Kevin & Aunty Sue

Well, they say a girl marries someone like her Father - and this incident proves it! There is a long and (dis)honourable tradition of passing out on the clinic floor in our family.

Have a safe Christmas! Dad

Well let's give thanks that the knife was blunt or it would have taken the whole thumb off!! What became of the gas heater?
Happy Christmas guys. Thinking of you here in snowy toxteth.
Much love,
Jack

Hey Dan and Becky
Got your blog address from Liz Watson, really enjoyed reading about your adventures in Nepal. My Husband (Andy) and I along with our 14month old son, are returning to missions in 2012 and so far looking at the options. KISC very much appeals to us, but we are still looking at all the options. So maybe we will see you one day! God's richest blessings as you serve in Nepal.
Laura