Early on in our time in Nepal we managed to do a few treks. We went to Annapurna Base Camp and trekked on the north side of the Himalayas. We even did a trek with Sam when he was about 18 months old, but apart from Dan joining the year 7 trek for activity week in 2015, we haven’t trekked for some years.

Several of our friends with similar aged or slightly older kids had done it though, and shared with us about how good it is and how well their kids tended to do. The secret – go with friends. Then it’s just friends running along a path together rather than an arduous walk.

So this Easter break we decided to venture out. We went with another family with similar aged children, 2 boys a year either side of Sam and a girl a year younger than Mim. We did a 3 day trek, walking for 4-5 hours each day, for 10 or so miles, through the hills just south of the Annapurna Mountains. 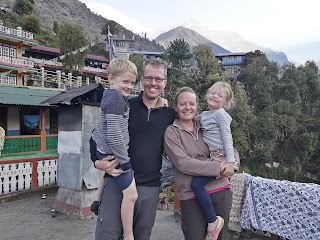 We reached a peak altitude of just over 2000m, had two days where we climbed about 500m during the day, and navigated probably a thousand steps. We had fantastic views of Annapurna South, touring above us at nearly 8,000 metres but only a few miles away. And we had a lot of fun. The kids, especially the boys, were hard to keep up with and the girls did great, Mim managed to walk every step.

Two highlights of the trek involved water. The first, at the peak of our trek was hot springs, which was a great way to relax after 2 days of walking enjoying fabulously warm water. The second was an impromptu dip in the freezing cold mountain stream on the last day, including finding a natural slide in the stream. Nepal really is an amazing place to grow up!