The weather in the UK is never predictable, as I'm sure you don't need me to tell you; so living in a country where you can predict almost to the day that the rains will stop is slightly odd for those of us of British origin. However that is the case with Monsoon here. We were told this week that the 30th September is the official date for the end of the rains, but that sometimes it goes on for a few extra days.

Once it does finish, that's it for rain till the winter rains which are supposed to be around January time, although they were much later this year. It's weird to think that we won't have any rain for 3 months or so given the situation now. Everyday it rains, not all day of course, but if we go 24 hours without it it's unusual. Often it's been quite good and just rained at night, which has the added bonus of keeping all the street dogs quiet as they seek shelter, enabling a better nights sleep for us.

While the rain does vary from British style drizzle to tropical style torrents we've learnt one key thing; if you go out without an umbrella or raincoat you can guarantee what it will do. Last Saturday evening saw the biggest downpour we've had since being here. Our house fills most of the compound it's on, but there is a paved area which goes all the way around the house. Well as a result of the huge deluge in such a short period this paved area was turned into a moat, trapping us in our house. 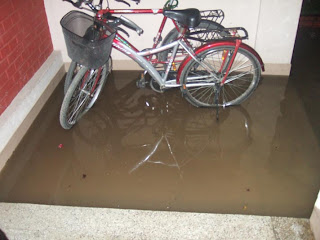 Thankfully our flat is up two small steps and the flood waters only made it to the top of the first step, so our flat stayed dry. However we knew of two houses that weren't so lucky and our friends living in those houses saw quite a bit of flood damage. One friend said she was sat on her bed reading when she noticed her bin was starting to move across the room. In another house the flooding was so bad the dog had to actually swim through it to get to dry land. We've been reassured since that downpours like that only happen about once every year, so hopefully we won't see another one like that this Monsoon.

We've now been back at school two weeks and have really enjoyed it. Actually being on full timetables, having a form and being one of the slightly experienced members of staff, showing the new guys the way has been really good. It has been busier though, particularly for Dan who spent quite a bit of the summer organising the timetable; then mistakenly assumed that after the first day of term that would be it and no changes would need to be made. 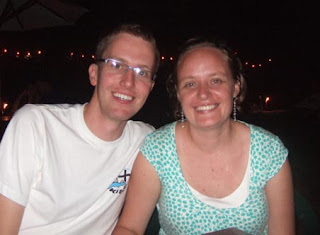 We hope you are all having a good summer and enjoying the unpredictable English weather. Thanks for all of you who've been in touch, we do enjoy hearing news from England (or Ecuador as we did this week), apologies if we're sometimes slow to respond but we do appreciate the updates.
Posted by Dan and Becky at 10:45