Mid-January to Mid-March is wedding Season here in Nepal and last week we were privileged to be invited to a Nepali wedding. In fact it’s not actually that much of a privilege as traditionally in Asia the person hosting the wedding has to invite basically everyone they know. So much so that we have even been invited to weddings of people we’ve never met before in our time here. 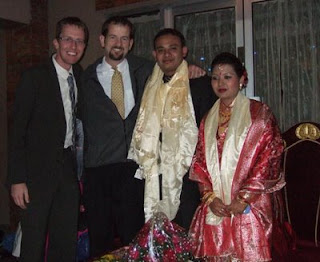 However the wedding last week was a special wedding as it was the wedding of a colleague from school; our IT technician, a man who Dan works quite closely with. Nitin is 28 years old and had been introduced to his new wife through his Uncle. The week before the wedding Dan and the other ICT guy at school took him out for a stag-do! It involved about 10 staff from school going out for Momo’s, a Nepali favourite and Nitin’s favourite food.

Nitin actually got married down in the village his wife’s family come from, about 3-4 hours drive from Kathmandu. The marriage ceremony itself is normally a much smaller event than the marriage celebration which takes place a few days after the ceremony. It is to this that the world and his wife are invited.

Traditionally at a Nepali wedding the bride is supposed to look unhappy, so as to not offend her family as in Nepali culture it is viewed that she is leaving her family to join his. However it’s a good job that the groom is not subject to the same requirements as Nitin is always smiling. Although he’s not smiling as much as normal in this photo he did carry a big grin for most of the wedding. Keen readers of our blog may recognise the other guy as Ryan who we mentioned back in June when his wife had just given birth to their third child. 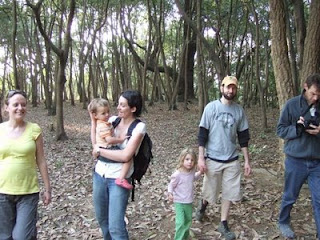 Talking of children, Becky and bump are doing very well. She is now into her third trimester and growing by the day. The baby is very active and as far as we are aware healthy. It’s now only one month until we return to the UK and we are starting to pack up our house. It doesn’t seem long ago that we were doing likewise in our house back in Liverpool.

By the way the second photo was taken on a recent walk with a group of friends. Not sure if we shall update our blog again before we return so if we don’t we are due back in the UK on the 4th April. We are currently trying to arrange meeting up with people, so if you’d like to meet up with us then do let us know and we’ll try and book you in. We’ll also use the blog to keep people up-to-date with baby announcements etc while we are back.