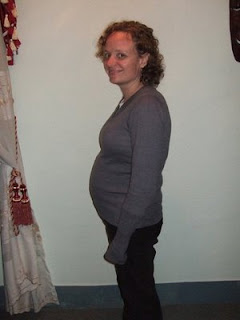 Well it has been a while since we last wrote, and actually there isn’t that much news. We’ve been back at school for four weeks now. The last few have been very busy with the whole school doing exams which we had to mark and then write reports for all the students. Thankfully that is over now and we are just getting on with regular teaching stuff. For Becky, they were the last set of reports for some time! Just 8 weeks until we return to the UK. Becky is growing by the day and definitely looking pregnant, as you can see in the picture on the left, now with a very active little one inside her – lots of kicking!

Anyway I’ve entitled this update "load shedding", as we have had a lot of it recently. Load shedding is what they call the scheduled power cuts here. Most Nepali electricity is from hydroelectric schemes, and so when the water runs low they can’t generate enough power. This winter has been particularly bad for a number of reasons; the amount of rain was low the last year and so the reservoirs were not filled up, bureaucracy and political instability over a number of years has also led to existing power stations not being properly maintained so we’ve had one or two that have broken down. Then, as a result of floods at the end of the monsoon last year the power lines that bring extra power up from India were washed away and not fixed. 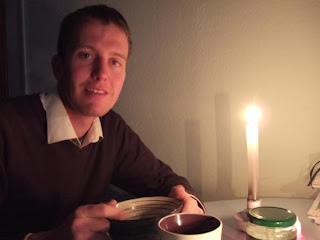 So all this culminated in us having up to 16 hours a day without power at the worst point. We had 4 hours of power during the day and 4 hours in the middle of the night, so really only 4 hours of power a day. As well as the obvious problems this brings (such as teaching ICT for Dan) it also leads to water shortages for washing and drinking as all our water is pumped up to the roof using an electric pump that has to be manually switched on, usually about twice a day. So if there is no power for most of the day it means someone has to get up in the night to pump it up. Thankfully our landlord sorted this out so we're not up in the night, although it is a noisy pump so it is hard to sleep.

We’ve started to get used to this now and just have to plan our days around it. School has a generator which is used for large amounts of the day, however this is expensive to run and cannot run all day as it overheats and so people have to coordinate their power needs and plan ahead, especially if you need photocopying or want to watch a video with a class. At home it means making sure laptops are fully charged so we can run off the batteries when power is out, and also planning what nights we have power so when we can use the oven to cook and when we only have the hob.

It is amazing how quickly you get used to it though and when I look back to living in England I realise how much I took electricity and even the regular hot water supply for granted! Still we’re looking forward to the treat of 5 months with no load shedding and long hot showers!
Posted by Dan and Becky at 15:20