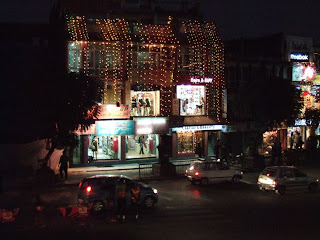 Last week saw the Hindu festival of Tihar, better known as Diwali outside of Nepal. This is the festival of lights, so it kind of feels like Christmas with everyone putting up lots of lights inside and outside their houses. They also set of lots of fireworks and bangers, which tend to be very loud, but thankfully never disturbed Samuel. 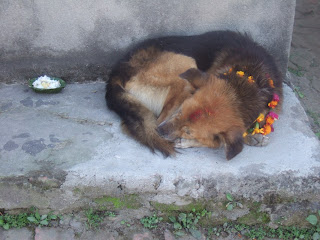 The festival lasts for about 5 days and includes one day of worshipping the dogs, so they put garlands and tikka’s on the dogs. There is another day where they worship the god of wealth and as part of this they paint a path with red clay from the money box out onto the street. They then decorate the street end of the path and often light the path with tea lights. This festival is surely the best for burgulars. 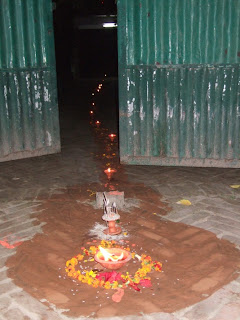 It is a much happier festival than Dhosai which was at the beginning of October and Nepali’s seem to really enjoy the celebrations. There were numerous parties going on in many of the houses nearby, including one where the (bad) Karaoke went on until 2 in the morning. We were not impressed.

As a family we are starting to feel very settled in our flat and are starting to make it feel more homely for us. Just yesterday we moved all the furniture (inherited from the previous tenants) in our living room around to get a layout that is just ours.
Posted by Dan and Becky at 12:16