We’ve been meaning to update our blog for a little while now, but keep struggling to think of a good topic. So this time the update will just contain some general news. 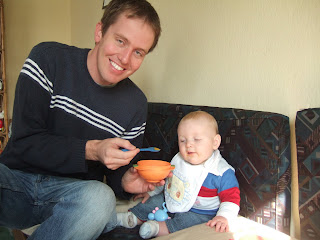 This week Samuel has started on grown up food. Well if you can call carrot mashed up and mixed with breast milk, grown up food. He seems to be taking to it okay so far, although he’s not had too many delicacies so far. However we’re aiming for smoked salmon and caviar soon. He’ll need to learn to get a bit more in his mouth before we actually try that on him. The faces he pulls when he tries new flavours are quite something, but he gobbles it down fairly quickly. 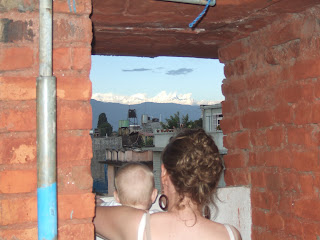 They’ve gone away over the last couple of days, but over the previous few weeks we’ve had some truly spectacular views of the mountains. October/November is usually one of the best times of the year to get good views of them and this season has given us some of the best views we’ve ever had. I think we’ve especially enjoyed them recently as we now have a flat where we can actually see them from inside and also immediate access to the roof which gives us a great panorama.

We are now half way through the second term of the school year at KISC and everything seems to be going well for Dan as he works away there. However the Secondary Principal goes back to Australia for 6 months in 2 weeks, which will mean a lot more work for him. Becky has settled in well to life as a full time Mum and has already joined a number of mums and tots style groups. Some good friends, who also had their first baby in the summer, have just returned to Kathmandu. The wife of the couple and Becky have been out together this week which caused even more interest than normal.
Posted by Dan and Becky at 15:10