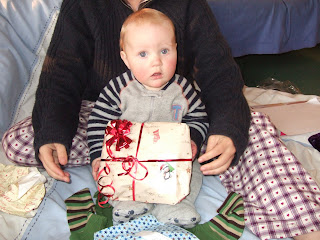 I thought for this blog you might like to know what Christmas Day was like for us here in Nepal, as it probably has many similarities and some differences to the Christmas Day you celebrated.

Samuel woke us up nice and early on Christmas Day, not because he was excited, but because that is what he does every morning. Soon after we had a breakfast of porridge and tea, the same as most days this time of year. Porridge is a must most mornings as it warms you up, the temperature here at the minute means you can see your breath indoors. We then opened our presents and soon after headed off for church – not that different to a British Christmas so far. 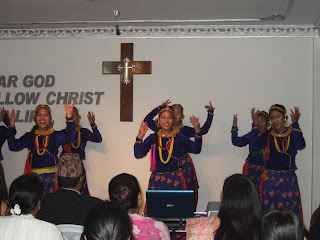 However Church on Christmas Day in Nepal is significantly different. It’s a day when many Hindu’s come to church as they understand it’s a special day, so most churches put on special “programmes” rather than a nice short Christmas service. Our church lasted 2 ½ hours, and included amongst other things a traditional Nepali dance.

However, some of our friends’ churches went on all day (although most of them didn’t stay the whole day). After church a nice big DhalBhat (lentils & rice) with vegetable and chicken curry was put on. We managed to resist the server’s efforts to give huge quantities to the Bideshi’s so as not to spoil our western Christmas dinner coming later.

Soon after we headed home and started work on cooking our Christmas dinner, for which we had 6 guests coming. We were aiming for a 4pm serving, a slightly strange time, but we couldn’t do it much earlier due to the length of church and size of dhalbhats that took up the morning and early afternoon. But then the power went off at four making the other option 8pm which seemed a bit late. However come about three thirty it was clear that the large oven we were borrowing to cook the chicken breasts and potatoes was still not much better than warm, despite having been on for an hour. We faced the prospect of a ruined dinner, but we managed to squeeze enough chicken breasts into our little oven and we decided boiled potatoes would be fine thereby enabling us to enjoy our Christmas lunch at 4pm as planned. 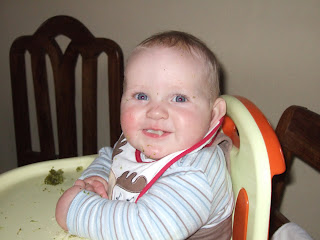 Christmas lunch was especially enjoyable for Samuel who was given a selection of vegetables to enjoy. We were both distracted with being hosts and the lively conversation and suddenly realised that Samuel hadn’t quite grasped the idea behind Broccoli. As you can hopefully see, very little ended in his mouth, he even managed to get some in his eye!

After lunch we had a ninety minute wait for desert as we needed the power back on to heat our Christmas pudding (steaming would have taken much longer we realised too late). We then enjoyed an evening of games, chatting and eating various desserts; we had a choice of Christmas pudding, Banoffee pie and mincemeat pie plus a selection of cookies, mince pies and other nibbles. Then at 8.45pm came the moment we’d all been waiting for. Unfortunately it couldn’t be found anywhere online to view it live, but we were able to listen live to the Queen’s speech. A few more games and trips to the pudding collection brought our first Christmas as a family to a close.
Posted by Dan and Becky at 13:14