Christmas time in Nepal is not quite like the UK, as you can probably imagine. For starters we’ve only really become aware that Christmas is upon us in the last 7 days. Not like the UK where cards where appearing in some shops before we left back in September. 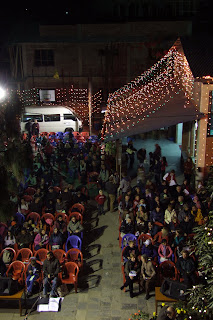 This year there is also the threat of a nationwide, general strike by the Maoist party. They are in the third phase of the protests about the actions of the President back in May. The strike they are planning will initially be for just 3 days, but if their demands aren’t met they are saying it will continue indefinitely. This means that there is the possibility of everything being closed for quite some time if the strike is as serious as some believe it might be. So yesterday we went out and stocked up, including everything we need for Christmas dinner.

Changing tact completely Copenhagen has dominated the news everywhere this last week or so. You may have seen on the news that the Nepali government held a Cabinet meeting at Everest Base Camp a few weeks back, with the aim of raising awareness of Climate Change; flying everyone up there in helicopters for a short meeting. They’ve also taken about 400 delegates to Copenhagen. The words footprint and Carbon spring to mind. 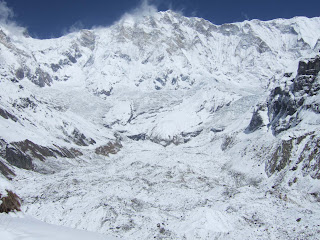 Of course it is the poorer countries, like Nepal, that are likely to be most affected by changes to the climate. We saw evidence of this last year when trekking in the Himalayas we saw a Glacier that had retreated quite some way, compared to photos of just 50 years ago. However, we know it is also many of the poorer countries that are the worst polluters as they strive to catch up with the west in terms of development. But change is happening so fast in places like Kathmandu policies and procedures aren’t put in place to moderate the development and protect the environment. We see that daily with streets thronging with traffic pumping out thick black fumes and the outskirts of the city littered with hundreds of brick factories making the bricks to keep up with the city’s unregulated growth and adding plenty of their own fumes to the atmosphere.

Anyway, Hope you all have a very Merry Christmas and a Happy New Year.