Sat having breakfast this morning I could hear a man walking up the street blowing a loud blast on his whistle at short intervals and it really hit home to me what a noisy country Nepal is. Every noise has its meaning and purpose and only a few bother you after a while, but it’s never quiet. 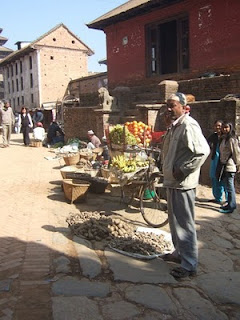 The guy with the whistle is the garbage man and his little cart, letting people know he’s coming to collect their rubbish. Accompanying him in the streets are the fruit and vegetable sellers, who call out the produce they have with them on their bikes as they wonder the streets, the mattress stuffers who have a very primitive box guitar which they twang to inform you they are coming and the plumber who wonders along rattling a all his metal work on a big ring.

As I'm typing this I can hear the flock of pigeons who live in our neighbours roof and the carpentry factory just down our lane with its electric saw. When I say factory I mean shack propped up against the side of another building on a small strip of land. We’ve never worked out how you get in their to order your furniture as there is a wall separating the lane from the land, which is also about a 6ft drop down from the lane. Deliveries pass the wood over the wall and down to a guy below. I also heard a minute ago the elaborate sounding horn of a truck out on the ringroad which is about 400 metres from our house. 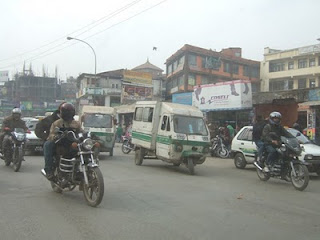 When you are out on the roads your ears are dominated by the sound of horns. I know this isn’t unique to Nepal, but it took some getting used to when coming from England. The horn is used to let people know you are there, all the time. When going round corners, overtaking cyclists or pedestrians, coming to a junction, letting your chowkhidar know you have arrived home and can he come and open the gate or just because you like the sound of it, the horn must be used.

Power makes a noise here too as so the din of generators can be heard counteracting the 12 powerless hours faced by business. Then at home when the power returns we here the noise of the fridge turning on, which is greeted with the cry of “bhatti aayo” (power has come).

In the evenings when we are watching a DVD we usually have to pause it at some point as all conversation is drowned out as a jumbo jet takes off over our house. Then we go to bed and the noise doesn’t stop. Dogs bark throughout the night, regularly setting each other off, and the cats from the house behind us were screeching at 4 yesterday morning. Then at 6 we are woken (if Sam hasn’t done so already) by the noise of the bells, trumpets and choruses from the Catholic Church behind us as they start their morning worship and the Hindu temples all around as people raise their gods by ringing bells.
Posted by Dan and Becky at 14:54

It's amazing how similar all that appears to us. i once asked a taxi driver why they use the horn so much. "Ah Saheb", he replied, "there would be many accidents if we didn't use the horn". The biggest killer of foreigners here? You guessed - road traffic accidents. Great to see you last month - all seems aeons ago now lots of love and many blessings
Chris and Anne

Good to have contact with you here in Derby, and welcome to our BMS WM Link Group. We look forward to hearing more of you in the months/years ahead.
With prayer and best wishes,
Peter Shepherd
(minister, Broadway Baptist Church Derby UK)