As you may have heard, the deadline for the constitution passed peacefully on the 28th May with a last minute agreement being made between the main parties to extend the Constitutional Assembly for one year.

There were three points to the agreement; compromises that the parties agreed to make in the coming days. However, nearly a month later we have not seen any move on these three points and so no unifying government has been created.

The main issue of contention seems to be that one party want the Prime Minister to step down. He has said he will do that once it has been decided who will take his place and how things will be handed over so as not to leave a power vacuum. He also wants the other parts of the agreement to be meet, but the other parties want him to go first.

So it seems to be at a deadlock at the moment, as the various parties discuss who might go forward for the post when it becomes available.

However, whoever the candidates are, a majority need to agree on who should take the post and there is no party with a majority and no coalition seems to be forming between any parties.

So all still seems a little unsure here at the moment and the constitution is still not moving forward. 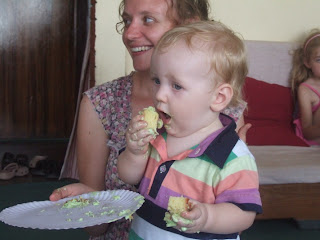 In other news:
Samuel celebrated his first birthday a couple of weeks ago, and you can see he enjoyed the cake in the photo.

We’re still waiting for the monsoon to start. We’ve had a little rain over the past week or so which has temporarily relieved the oppressive heat, but nothing regular or heavy enough to make a real difference. A heavy monsoon has been predicted for this year which is needed to build up the water supplies in the reservoirs and for crops to grow so hopefully it won’t be long.

We’ll be in England for most of July for a short holiday and so are looking forward to escaping the heat for a bit, as well as seeing family and friends of course!
Posted by Dan and Becky at 15:43