This week we passed the one year anniversary of our return to Nepal as a Family. Looking back over that year it has been an interesting time with some good times and plenty of challenges. We thought for this update we might highlight some of the more significant ones.

Our return a year ago signalled the start of Dan’s work as the Vice Principal of the Secondary School. Although a lot of the main parts of his job description he was already doing before, such as the timetable, assessment and being a member of the SMT, it’s amazing how just having a title placed on you increases the amount of what we like to call “dukkha” that comes your way. (I’m sure no translation is needed).

We’ve already mentioned in other blogs and letters about the biggest challenge in that time has been being without the Secondary Principal for 6 months, however she is now back and Dan is enjoying being part of a principaled team!

Dan would say he’s enjoyed so much of the work that he has done over the last year and taking on the challenges of the role. It helps that he’s working in an great school that has some fantastic students, and really great staff too. 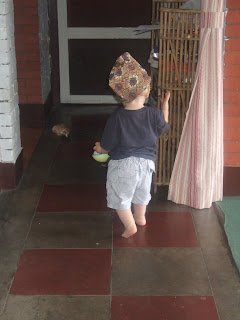 While Parenthood began a little longer than a year ago, it was the return to Nepal that saw Dan go back to work full time and Becky become a full time house mum. This brings with it extra challenges living in a city like Kathmandu with it’s lack of green space and activities specially designed for one year olds. However, it also brings with it a great community. Becky has built up a strong relationship with another first time mother of a baby just a couple of months younger than Samuel. She’s also been able to join a mothers prayer group, a singing group and frequented at least two other mums and tots groups from time to time.

Samuel has faced all the normal challenges of a 3 month old to a 15 month old and taken them in his stride. He has learnt to sit up, walk, start to talk and have lots of fun in the process. He has a good friend in William, the son of Becky’s close friend, and managed to see more of the world than the average one year old. As you can see from the photo above he's adapting well to the culture. Next month he’s off on his first trek! 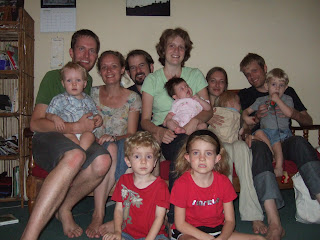 The mission community is always changing and during this year we have said goodbye to some great friends with whom we built up good friendships during our first, Samuel-less, stint here. There are always people leaving Nepal, and of course arriving, but saying goodbye always seems much harder than the joys of the Hello’s. Also, the longer we are the harder it seems to build good new friendships, as in the back of your mind there is always the thought, we’ll just have to say goodbye to these guys soon. However, we do try to fight that and invest in new relationships and are thankful for the new people that are always arriving. The photo is from a get together with two other familes we had, one of which left Nepal last week.

Awwww shux, we made your blog. We do miss you guys. If you're spending any time in Bangkok we should get together.