This last weekend in February has been KISC's midterm break. So we had 5 days off together as a family. A good chance to catch up on jobs at home and to spend time together doing things we don't normally get to do.

On Sunday afternoon we went out to Godavari Botanical Gardens on the edge of Kathmandu with some friends. We had not made it out there before and now wish we hadn't waited so long. It is just a half hour ride by minibus, and at less then 20p each (kids go free), a bargain. Although we did end up with all 4 of us and a Nepali lady sat on a double seat - so it was cosy! 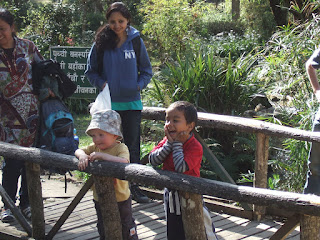 The gardens were really lovely, lots of open space for Sam to run around and the weather has been really warming up so we had a nice picnic lunch there too, enjoying the sunshine. This is obviously THE place to go for dating couples though, they were all over the place. In a culture where public displays of affection are not done and dating as we would in the west is a very new thing, couples are always looking for quiet places where they won't meet anyone they know! 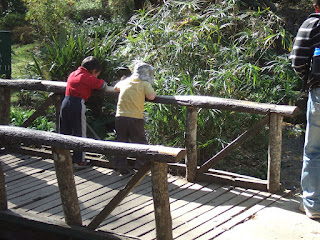 Afterwards we stopped for a chiyaa (A very sweet, spiced tea drink) in the local village. Miriam soon made friends as the neighbours all came to see, and hold, the bideshi (foreign) baby. Sam isn't keen on this attention and spent his time climbing the wall outside. We then went to catch the minibus back, again there were 5 of us on a seat made for two for most of the journey. We also had a slightly crazy driver who was in a hurry to get back so he could get more passengers as it was coming up to rush hour and so the more trips out of Kathmandu he can make at that time the more money he can make. When the locals are calling for the driver to slow down it is a little worrying! But we all made it in one piece. 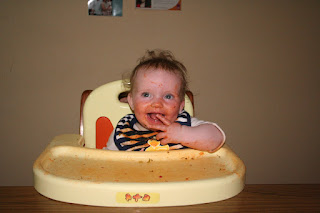 On the Monday evening we had a cross cultural evening. We were invited as the token Brits to a Southern American BBQ. The meat had been smoked for the whole day. Our chef had got up at 5am (having not been able to sleep because he was so excited!) to go round to our hosts, waking them up, so he get in and get the meat in the smoker before 6am so that it would be ready for us at 6pm! It was delicious, and made our British BBQs seem rather lame in comparison.

Sam enjoyed the evening too. The family hosting have chickens, bees and two dogs. So Sam got to feed the chickens and even stroke one. He was less keen about their 6 month old Alsatian "puppy" which was bigger then him and he reffered to as "The Lion". It kept trying to lick him when we first arrived but once it calmed down he was happier and we had to find the Lion to say goodbye when it was time to head home for bed.
Posted by Dan and Becky at 15:12

We sure miss you guys! Great update, and good to hear what's new!