The Roads, they are A-Changin'

Road works in Nepal, as you can probably imagine, are a different kettle of fish to the West. You will often come along a road to find somebody has dug a hole or trench, for reason that may or may not be evident. Sometimes they will put a leafy branch in the hole so it’s clear for motorists that there is a hole, but there are no cones, and certainly no cone hotline. 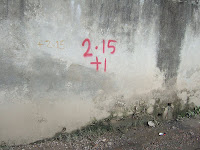 Over the last few months however the road works have taken on a whole new level. You see about 25 years ago a law was passed that set the boundaries of the council owned roads, and thus the limit to which people’s properties could extend. However, it was ignored by everyone and people just built the wall of their property a bit further out, claiming a little extra yard/garden space in the process. But many houses were built that stretched over the line.

Until recently this wasn’t a problem, but then the municipal council for our part of Kathmandu obviously decided that a key solution to the busy traffic problem was to reclaim their road space. And so the road widening has begun. First the numbers appear on the walls. I’ve never seen anyone actually doing this, maybe they do it at night, but when those dreaded red numbers appear, indicating the number of metres to be reclaimed, you know your wall will be going soon. Then notice is given that the wall will be coming down soon. The notice is a sledge hammer through the wall.

At this point most people start building their new wall the required number of metres back from the road. One of the huge benefits of this whole process must be the amount of casual labour work it is providing for many Nepalis who may have been struggling to find work a few months ago. The streets soon look like the set of a World War II drama as they are filled with rubble of walls coming down. Kathmandu is already quite a dry and dusty city and so the air is filled even more with dust. The existing road actually becomes smaller as the rubble piles stretch out into the road.

Of course for the houses that extended too far it goes to another level, as for many they basically have to take off the front of the house and rebuild the front rooms a few metres smaller than before. The most extreme house we’ve seen is the one in the photo here where a four storey building seems to have lost the front room on every level. There used to be a shop in the ground floor that has now moved next door, but I don’t know what happened to the families that lived above it.

This is not a short process, the first street to be affected is a little way from us, but we think it was a about a year ago they started the process. They finally re-tarmacked a couple of weeks ago. It does look good, and hopefully in the long run will be worth the effort for the city, but it doesn’t half have a big impact. The red numbers have appeared on the road between our house and school. A road which also features a school of a few thousand students who are bussed in on dozens of buses every day. Thankfully there is a back road to school, which I think will become well used by us in the coming months.
Posted by Dan and Becky at 10:01