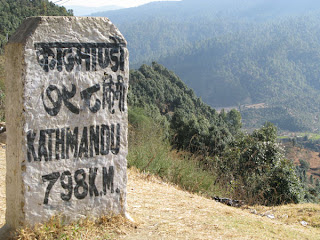 When you were 15 or 16 how did you want to spend your Easter break? Well this Easter eight of the KISC students decided that they wanted to spend their break doing a mission trip to the far west of Nepal, to a region called Dadeldhura.

Dadeldhura is so far that as I write on Tuesday evening the team should be just arriving, having left yesterday morning at 5am. They drove for 15 hours yesterday and stopped overnight at Nepalgunj, close to the border with India and about 500km west of Kathmandu. Today was a further 300km, including up a steep and windy hill road and a late arrival.

Click here to see a larger map of the trip.

KISC's owners, HDCS (Human Development and Community Services), a Christian Nepali NGO, run the district hospital in Dadeldhura (it's located in a small village called Armagadhi). It is the only hospital for miles and many people have to walk for days to reach it from all over the region. We have friends who work in the hospital.

For the next 5 days the team will be involved in the local schools and churches, painting rooms, teaching simple english classes and tai-kwon-doo and helping out in the local church service. Although they do have 3 teachers with them they have planned the trip and the activities themselves and in fact raised all the money for the trip.

The idea of the trip came from two students who used it as part of their manifesto as they ran for student council president in January. While they weren't elected Presidents, they didn't let that stop them and they have organised the whole trip pretty much by themselves and been the driving force behind it. The total cost of the trip was just under $1,000 and they have raised this money themselves over the last 6 weeks, through donations from home churches, a grant from BMS World Mission and a large chunk of the money through a bake sale after the international church one sunday a few weeks ago. In fact they have raised so much money they plan to do another trip next school year, for which they already have a significant amount of funds.

So, if you pray, please remember this team over the next 5 days as they try to make a difference in a remote and very poor part of Nepal, and in the following 2 days as they travel back. This is a group of young people who have inspired me over the last 6 weeks, as they have decided to try to do something to make a difference, and try to bring justice and love in their own way in Dadeldhura.
Posted by Dan and Becky at 13:56