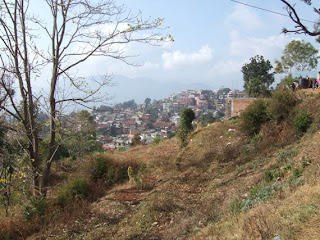 A very Happy New Year to you all from Kathmandu. We're now back here having been away since Boxing Day making the most of our time off school. We decided that this holiday we would go to a more remote part of Nepali away from the tourists. So while we did spend some time in Pokhara, we also travelled to Tansen about 120km South West of Pokhara.

Tansen is a medium sized (for Nepal) town that sits atop a ridge overlooking a valley known as the White Lake. This name was in evidence each morning as we looked into the valley and saw a white lake of clouds that looked lovely and picturesque. Tansen is well known throughout Nepal as it was the site of one of the first Mission hospitals set up here when the country opened up in the early 1950’s. In the past people used to come from all over the Western side of Nepal, and parts of northern India to be treated there. While there are now many more hospitals around it is still a popular hospital with a very good reputation.

We were staying in the guest house next to the hospital, which is mostly used by short term workers who come out for a few months to help out. The guest house was lovely and the home cooking by the cook was exceptional. Good quality western food. We spent most of our time lazing around, reading and going for wonders around the town.

Acting as our guide to Tansen was Khim, our Nepali friend who works with us at KISC as the school administrator. Khim grew up in a small village about 10km from Tansen and then moved to Tansen itself when he was 15. He finished his schooling and went to college in the town and then worked at the mission hospital, mostly as a language teacher for a number of years before he moved to Kathmandu. Wondering around the town with Khim was a bit like being in an episode of “This is Your life”. He seemed to know so many of the people, particularly those living near the hospital, and in a culture where most people spend their life outside their front door we never got far without Khim being asked how he was, or how his mother was. 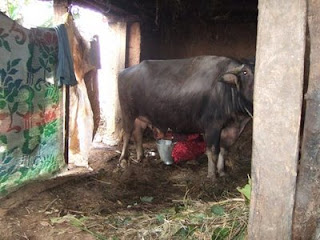 A number of his family still live around the area and one day we walked past the village where one of his sisters lives, so we popped in to say hello. Nepali people, particularly those outside the main cities are very accommodating and welcoming, and Khim’s sister was no exception. Upon arriving she instantly offered us a cup of chiyaa (Nepali spicy tea where the milk is boiled with tea and spices) and proceeded to go and milk the buffalo in order to make us the tea. Her next door neighbours were also excited to see us and Khim in particular and sent their children off to the next house, just down the hill to pick some oranges from their tree to give to us. (The chiyaa was excellent by the way).

The next day we decided to pay a visit with Khim to the village where he grew up. Khim, now 33, reckons he hadn’t been back for nearly 10 years, and as we started to walk up the hill from the road to his village he was surprised to find they had now built a road up to the village! As we struggled up the steep hill, Khim bounded ahead pointing out his school which was on top of the next hill. He used to have to walk for an hour and a half to get there each morning, all the way down one hill and up the next.

Upon arriving in the village we went from house to house saying hello and greeting the people who had been his neighbours 20 years ago, but still remembered him and his mum. At nearly every house we were offered Chiyaa and Dhalbhat, although we only accepted chiyaa twice. Upon finally reaching his house, quite some way up the hill from the centre of the village we met the distant relative who now lives in the house. She was delighted to see Khim and they spent some time catching up and filling each other in on family news. She told us about a landslide that last monsoon had taken out her stables, killing 3 goats and her buffalo, basically her means of survival. She had had to take a loan to buy a new buffalo nearly bankrupting herself.

Back down the hill we got talking to an old friend of Khim’s who showed us the school the village now has, built a few years after Khim left the village. It was far too small for the numbers of children they get every day and so they had attempted to build an extension, but run out of money before they got to the roof. The school also lacks any toilets. Khim’s friend is Chair of the School Management Committee (Nepali equivalent of the Board of Governors) and had been trying to raise the money to roof the extension for quite some time. 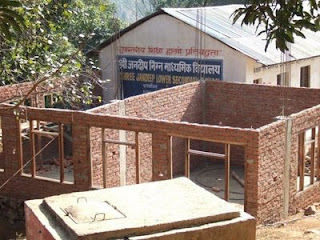 The Government pays for a few of the teachers in the school, but not enough for the number of children and nothing towards resources, such as books, pencils or buildings. It was amazing to see what humble beginnings someone like Khim, who has become very successful as an adult, has come from. However there is a desire amongst the village to move away, most houses were occupied by grandparents, looking after the farm land and the children, as the middle generation have all had to go to places like India or the Middle East to earn enough money to survive. Just as we were leaving we noticed high up in a tree a cable TV box that supplies the TV for the entire village. The children growing up in this village see the fancy cars and the wealth of the west and all they want to do is escape this life.
Posted by Dan and Becky at 11:14