This week we celebrated Samuel's second birthday. It seems an incredibly short amount of time since we were in the hospital with a brand new baby and conversely it seems 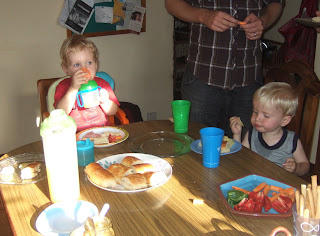 like he's also been part of our lives so long we couldn't imagine (or should that be can't remember) life without him.

It's also a special time as we await the arrival of his little sibling, who is due at the end of August. Next birthday, God willing, we will be a family of four, which sounds like a real grown up family!

Anyway, back to Samuel's birthday. We celebrated with a party with four of Samuel's friends and their parents in our flat. All boys. There was time playing with new toys (two minor meltdowns over who got to ride Sam's new trike), time playing games (one minor meltdown over the fact the music kept stopping in musical bumps), food (no meltdowns, although one refusal to eat) and then cake! (This made everyone very happy). 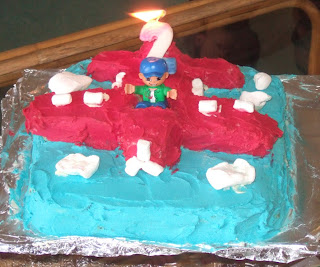 We live under the flight path for both local and international planes. Kathmandu International Airport is no Heathrow, but a few times each day we have the planes passing over our flat, and Sam loves pointing them out and going “Neeauun” as they pass. So we felt an Airplane cake was appropriate and Dan made a good effort (at least for someone with the artistic skills of a Sea Cucumber) and it was very much enjoyed by Samuel.

So year number 2 is complete, and Samuel is now on his way to 3, passing through the terrible two's, becoming a big brother, and hopefully becoming conversant in English and Nepali on the way.
Posted by Dan and Becky at 14:30